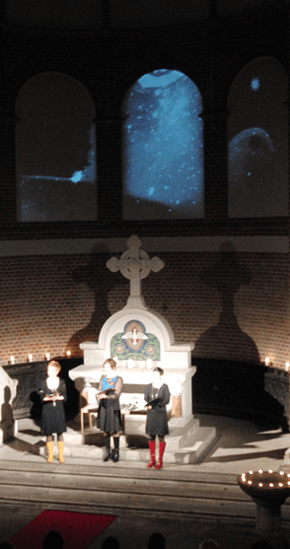 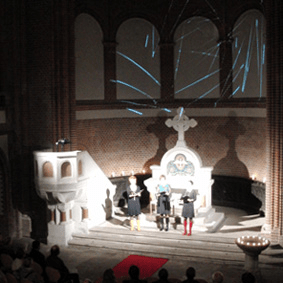 Mediaeval Mess from the 14th century presented with interactive video projections – a generative fresco – made by interaction designer Signe Klejs.
World premiere on a multidisciplinary project that adds a new dimension to old music.
The concert was played the 31st of May 2007 during the Bergen International Festival.
In March 2011 The Trio and Signe Klejs resumed their collaboration related to the Trio’s CD release “A Worchester Ladymass” with concerts in Magareta Kyrken, Oslo, Johannes Kirche, Berlin 2011.

EARLY MUSIC TODAY, August/September 2007 — Northern Delights: Trio Mediaeval steals the show – The result [of the collaboration with video artist Signe Klejs] was a striking series of impressionistic and kaleidoscopic images (…) And it was surprisingly effective. The images complemented rather than overwhelmed the music, and provided a still and intense atmosphere (…) One thing that certainly does work in performance is the singing of much of their music from memory (…) when you hear the results, a glorious combination of laserbeam accuracy, intimacy, and all-round flair and panache, you will be left wondering why more groups don’t do the same thing.