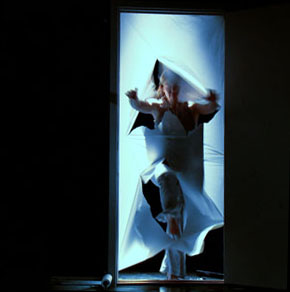 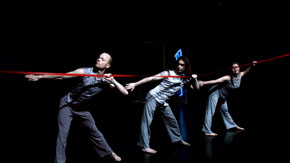 Inside Out – Outside In – An evening for dance and computers – in two parts.

Inside Out – Outside In is a dance performance in which two seemingly different worlds sneak up on each other via an interactive scenography. As with the world wide web images, scenes and action from everyday life are reused in new and multiple contexts. In this technological cocktail of a dance performance bodies of flesh and blood are mixed with live audio and animated images – equating the “real” with the “virtual” objects.

Inside Out – Outside In is about being human. About relating to oneself and the world at a time when the extensive use of digital technology affects the way we define ourselves both as individuals and social creatures.