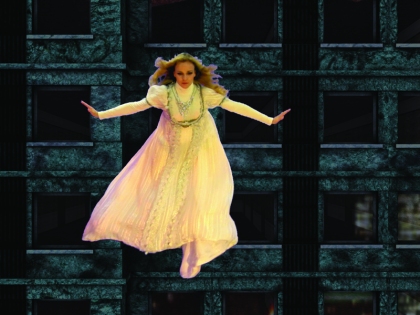 HoneyMoon is an interactive digital opera presented in 3D stereo and experienced by only one person at a time. The viewer is transported into a 10 minute scenario as part of a couple that jumps from a high building, slowly descending past an almost endless array of storeys towards the inevitable.
Initially the solo audience gets to choose between a female and a male companion, performed by the two famous Danish opera singers, Susanne Elmark and Joachim Knop. The journey then begins with the jump from the roof and continues with an experience.

The viewer wears 3D glasses to support the feeling of being present in the virtual world, and a wind machine that adjusts to the speed of the descent further adds to the experience (the fourth dimension). The singers were filmed in advance in 3D stereo while the building in the background is rendered in stereo in real-time. This allows the viewer to look up and down by walking forward or backward.

HoneyMoon is created by interaction designer Signe Klejs and composer Niels Rønsholdt in cooperation with TEKNE Production, CAVI, and the Danish National Opera and has been shown at CAVI during SPOR festival 2009, The National Opera in Oslo during Nordic Music Days 2009, at Republique, Cph. 2010, and during TRANSIT, Belgium 2013.